MY latest Salon story on the plight of the creative class has gotten more attention than anything I've written this year -- thanks to those who read and passed around this story.

"No Sympathy For the Creative Class," as it's called, looked at the distance between our assumptions about artists, musicians, writers, etc. and the reality of a life in the arts, especially during times that are hitting the creative class especially hard.  In any case, it seemed to strike a nerve.

So I'm pleased to announce that I'll be on Studio 360 with Kurt Andersen over the weekend. (Times vary.) This is one of the nation's finest arts/culture shows, and it was a real pleasure to discuss these topics, however grim, with the SPY magazine co-founder.

Kurt is an excellent interlocutor, and our conversation was lively. But I admit to being a bit tongue-tied when he asked me about solutions to our current plight. Part of what's happening is structural, grounded in technological changes, and cannot be easily reversed. Part of it may budge with changes in thinking and doing.

The simple answer, which I should have given Kurt, is that so far I have concentrated on the root causes and human, tangible effects of this new world we find ourselves in. As for a path out of the current crisis, to a less punishing world for creativity and culture, stay tuned. Ask me in six months.

I'm also going to start posting small items that relate to my argument. Here's a story from UK's The Guardian whose title is quite direct: "Other professionals don't work for free. So why are writers expected to?" As someone who broke into journalism by writing for nothing, because I was told this was an important exercise in "dues paying," and who continues to get offers to work for free, this hits me particularly hard. I welcome comments on it.

Thanks again for following these issues, folks, and see you on Studio 360.

UPDATE: HERE is the link to my interview, which broadcasts nationally over the weekend.

Farewell to the Man Behind Ecotopia

HE wrote a book that a lot of people haven't heard of, but one that influenced many and presaged a lot of the way we live now, especially on the West Coast, where it's set. That's Ernest "Chick" Callenbach, the Berkeley author of the book Ecotopia. Chick, as he was known, died on April 16.

This month has seen a lot of death in my world -- a very dear elderly relative, an old friend's mother, drummer Levon Helm -- and this one has a lot of meaning for me. When I met Callenbach, at his home in Berkeley in 2008, he struck me as one of the sharpest and most physically fit 79-year-old I'd ever encountered. (I remember him telling me how he walked from his house to the post office every day, which was quite a hike.) I also liked his sincerity, decency and sense of humor.

Because of a reissue of Ecotopia -- a slim novel which looks at a future in which Oregon, Washington and Northern California have seceded and begun an environmentalist utopia with a woman president -- I spoke to Callenbach for an article which became my first piece for the New York Times, my first piece of work after my layoff from the LA Times, and the first post on this blog. HERE's that story, which the paper titled, "The Novel That Predicted Portland."

My story looked at how hard Callenbach struggled to get the book published -- two dozen rejections.

“It was rejected by every significant publisher in New York,” he told me. “Some said it didn’t have enough sex and violence, or that they couldn’t tell if it were a novel or a tract. Somebody said the ecology trend was over. This was New York, circa 1974. I was on the point of burning it.”

Like a lot of '70s culture, the book ended up seeming less antique and more pertinent as we moved into the 21st century the limits to our resources became unambiguous.

I don't often stay in touch with former subjects; here's one I really wish I had.

(Here is a good obit from today's LA Times. And here is one from the New York Times.)

UPDATE: Salon has run a piece found on Callenbach's computer in which he looks, as hopefully as he can, to the future. They stand in some ways as his final words.
Posted by Scott Timberg at 9:44 AM No comments:

Roots of a Music Series

THE Santa Monica-based chamber series Jacaranda puts on some of the consistently most intriguing programs I know. Along with UCLA's Royce Hall and the Hammer Museum, it's one of the things that makes me wish I lived on the Westside.

The weekend's program included a piece by Olivier Messiaen, a hero to some in the group; West Coasters Terry Riley and Lou Harrison works will close out the season. I spoke to the group's organist and conductor, Mark Alan Hilt, as the latest installment of my Influences column in the LA Times. HERE is the piece.

Mr. Hilt demonstrates some of the issues I've discussed in my creative class series on Salon -- he, and the series he helps lead, can survive in part due to donors who value what the group does. But it also stands on a scaffolding of education (Hilt runs a student orchestra at a private high school) and churches -- a Presbyterian church has been an early partner, and its main venue, since this ambitious series began.
Posted by Scott Timberg at 2:47 PM No comments: 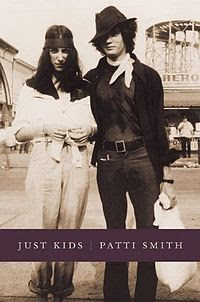 THE latest of my series for Salon on the damage the recession, digital technology and the Internet have exerted on the creative class runs today. I'm consumed with the Los Angeles Times Festival of Books this weekend but will try to post on it more extensively later.

This piece looked at the crisis and said, Why aren't we hearing about it? Why has it not entered the cultural conversation? And why do is our first gut reaction that artists and creative types are, as one of my sources puts it, idle dreamers?

I'll just say this one required the most work, the most research and I think has the most depth and sweep. HERE is the new piece.
Posted by Scott Timberg at 9:16 AM 4 comments:

I'VE been hearing about the rock songwriter and chamber music composer Gabriel Kahane for a few years now, and was glad to have the chance to speak to the hipster hero about his new piece, based on Hart Crane's The Bridge, which makes its West Coast debut this weekend. 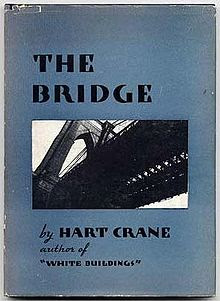 I also spoke to the esteemed Jeffrey Kahane and got a sense of how Gabe's eclecticism grew out of family tradition. HERE's my piece.

Speaking of music, here at the Misread City we're quite broken up about the death of Levon Helm, even though we saw it coming. His work with the Band and as a solo artist has moved a lot of people.

And this Sunday I will be at the LA Times Festival of Books, interviewing novelist Anne Rice. Hope to see you there.
Posted by Scott Timberg at 1:33 PM No comments:

The Return of the Shins 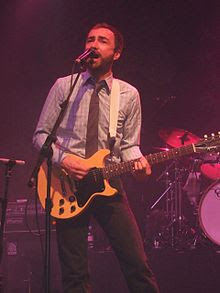 WHEN I sat down with all four members of the Shins around the time their Chutes Too Narrow album came out, I was already a big fan of the band's gentle, indirect songs and slightly obscure production that made their music sound like it had been recovered from a '60s bootleg.

I was also struck, that afternoon at the Authentic Cafe near Fairfax and Beverly, how strong and natural the camaraderie between the band members was. That day I was sure, that a) they'd stick with this lineup, more or less, as long as they lasted, and b) that good as they were, they were about as big as they'd ever be.

So much for my powers of prediction. The Shins have now followed fellow Portlanders The Decemberists into the major-label bigtime: Their new record, Port of Morrow, is a big hit on Columbia Records. And singer James Mercer, who I recall as a bit shy and very sweet and literary has, after his work with Danger Mouse on Broken Bells, broken up the Shins and reassembled it around his own leadership.

HERE is my piece on the band, which has continued to make good music through all the changes. 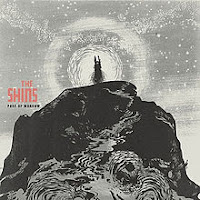 Mercer, by the way, told me he spent much of his life indoors playing the Smiths and other British bands.


"There's a certain weird melancholy to the melodies that I've always enjoyed," he says of English music. "I read in John Keats or someone, one of the romantic poets, that long ago they believed that the gall bladder created melancholy -- and that only the British had that organ."
Posted by Scott Timberg at 2:50 PM No comments:

The Roots of Leila Josefowicz

I EXPECT I'm not the only one looking forward to the concert at Disney Hall tonight, which continues over the weekend: the new Philip Glass symphony, in its West Coast premiere, with John Adams' Violin Concerto, both conducted by Adams himself. And the violin part in the Adams piece -- some days, my favorite piece by the bearded Bay Area composer -- will be played by the lovely and talented Leila Josefowicz, a longtime interpreter of Adams' work.

The violinist is the latest subject of my Influences column. She speaks about some fellow classical figures (including former LA Phil conductor Esa-Pekka Salonen) as well as her love of Led Zeppelin and Ian McEwan.

Josefowicz has also become an important force in playing and commissioning contemporary classical pieces -- she explains the origins of that impulse and tells me why she considers it important.

See you at the Phil tonight.

Photo courtesy LeilaJosephowicz.com
Posted by Scott Timberg at 10:53 AM No comments:

The Wreck of the Titanic

THE hype around James Cameron's film, which came out while I was working as a film editor, was so deafening that a lot of us closed our ears when it came to this infamous ship and its demise. I know I did. There didn't seem to be much more to say about the whole mess. 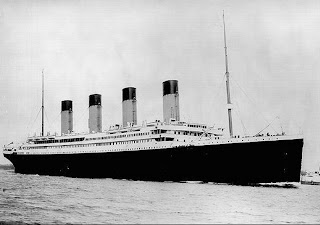 But here we are, approaching the 100th anniversary of the Titanic's demise, and there are a ton of new television projects coming, some of them quite good. (The Cameron film, of course, has returned in 3-D.)

HERE is my story on the array of recent and upcoming programs on the doomed ocean liner. Most of them go up next weekend, the centenary of the disaster.
Posted by Scott Timberg at 12:53 PM No comments: