The Many Moods of Keith Jarrett 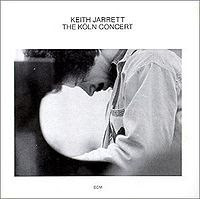 As a longtime fan of idiosyncratic jazz pianist Keith Jarrett, I would have been disappointed if I'd seen him perform without reaming out at least one audience member. And I was not disappointed.

Last night Jarrett made one of his rare appearances at LA's Disney Hall, and this show was devoted to solo improvisation -- pure Keith, unalloyed. He began the performance with a strange, gentle kind of sweeping his hands along the extremes of the keyboard -- my friend said he was coaxing ghosts from the piano. And many ghosts there were -- in the course of the show, he would summon French impressionist Erik Satie, soul-jazz pioneer Horace Silver and everything in between.

Because Jarrett's fame rests in part on extended workouts (freakouts?) on albums like the best-selling The Koln Concert, I was surprised his pieces were relatively short -- mostly ballads and blues which involves improvisatory fights or grooves, but were brought to a fairly crisp conclusion. From first track to last, I was knocked out. HERE is the review, just up, by the LATimes' Chris Barton.

But let's get back to the guy's quirks. He's known for standing up and down while he played, as well as moaning/humming in a vaguely Monk/Gould kinda way. The fact that three of the greatest pianists in modern history do this makes me think there's something to it: He seemed truly possessed.

Jarrett's anger and intolerance toward audience noise is a bit harder to take -- he's passed out cough drops at winter concerts and famously berated paying customers for coughing. But you know, there was way too much coughing last night. "There's some kind of duel going on out there," he said of the coughers.

And when a woman walked away from her seat, in high heels, between songs, he paused, and offered,
" Was that a horse?" There were also a few Luddite rants about the importance of things that don't change -- the piano for instance.

But you've not lived until you've seen Jarrett stand up and single out a man in the fourth row for using a flash -- "you've screwed up other people's experience!" he scolded -- and then sit down and play a tender version of "Somewhere Over the Rainbow."

Weirdly, in the audience a few rows in front of me was a Jarrett fan I consider one of the most dangerous men in America -- Kenny G. Was I tempted to run by him, pull out my corkscrew and end this frizzy-haired imp's reign of terror? Of course.

But I was so stunned to think that our tastes -- fairly disparate, I'll guess -- come together in the music of this difficult and astounding musician that all I could summon was a strange sense of awe.
Posted by Scott Timberg at 10:20 AM

Oh, come on! The man clearly has mental illness and that's evident in all his escapades with his audiences. I'd much rather listen to Gonzalo Rubalcaba or Jason Moran, who are equally talented to KJ, but utterly gracious, rather than listen to KJ's diatribes. Poor fellow, wish he'd get some help. I will never again walk on eggshells, listening to him and waiting for him to yet again "go off" on the audiences that clearly adore him. My $0.02.

I'm not so quick to diagnose someone I've not examined. But Rubalcaba and two gifted players for sure.

And if we left out all of the eccentric, unpleasant and outright crazy artists and thinkers, the world of music and culture would be far less interesting.

@BLambHall : Rubalcaba and Moran are not in the same league as artists. As far as Rubalacaba is concerned, to be honest, he's a great piano player, but not an artist of the stature of Jarrett - I'd rather hear Jarrett play the piano with his elbows. Furthermore, let's pretend that Chopin or Liszt are giving a solo piano recital, which is completely improvised from 0 to infinity ... and the concert hall is filled with people who love their music and them as artists, their spirit - now, would these people in the audience put up with other members of the audience coughing or making a noise in the middle of Chopin or Liszt's performance ... and if they did, and did nothing to ameliorate that situation, would Chopin or Liszt who are in the middle of improvising music in the moment, and who, I know, in that situation would be in an internal state, wherein they are not even "there" so to speak - would these artisits put up with that noise ? I think Jarrett is being kind when all he does is rebuke the dumbasses and get back to playing - it illustrates first of all that he can enter the "zone" at will ... or to be more precise, "without will" because the harder you "try" to enter the zone, the less you'll find the zone - Chopin or Liszt in his situation, would probably just get up off their instruments, and leave the venue. It's a telling comment on the state of society, when an artist of transcendental stature is abused and called "mentally ill" for rebuking the people who are doing actions (consciously or unconsciously ) that would destroy the artistic process in the middle of a gig - it's these people who should be taken to task by society, not the artist - Jarrett is absolutely right for saying that people who behave this way mess it up for everybody else - I suggest Mr.Blambhall wear high heels and develop a persistent cough and go to a performance of a top level symphony orchestra or a musician playing classical music - and then proceed to continuously cough through that performance and in the middle of some Mozart concerto being performed by Ashkenazy or someone like that, walk out of the auditorium making a loud sound with his high heels. And then let him see the consequences of that behaviour.

It's true when they say that some eras do not deserve great art.

I made a mistake in thinking BLambHall was male - the profile picture did not load on my comp for some reason...