The Life and Death of the Alternative Press

IF it weren't for the '80s Village Voice, I probably would not be a journalist. (The world, I expect, would be a better place.) 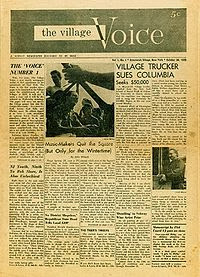 This weekend I have a story in Al Jazeera America about good times and bad for alternative weeklies. I talk about the crystalline sense of mission these publications had during conservative times, and the troubles they've had more recently. And I try to shine a light on the good and important work they still do.

In the piece I get into my youthful infatuation with the alt-press -- I interned at the Voice, freelanced for the now-defunct Boston Phoenix soon after leaving college, later worked for New Times Los Angeles. As nasty as that company could be, we had a blast there, some of the time, and I'm still proud of the work my colleagues and I did there. (Even if New Times responded by killing the paper and destroying its online archive.) Where is the alt press now?

And I try to sketch out what various weeklies have meant to the city of Los Angeles, which remains the Misread City.

Happy holidays to all my readers.
Posted by Scott Timberg at 4:39 PM

Have you had any comment from the so-called Association of Alternative Newsmedia? AAN is meeting in SF next month.

If you have Dell laptop and you stuck in trouble because your laptop is not getting open or if it opens shows a blank screen. To fix this issue just ask for help to experts via dell customer service number 1(888)784-9316. This number is open for 24 × 7 for every customer and technical team help to fix issues related to Dell laptop in short duration of time.