Catching Up with Stephen Malkmus

THE other day I spoke to the former leader of what may've been the greatest band of the '90s -- Stephen Malkmus of Pavement. Their mix of melody and noise electrified me during my misspent youth, and it was gratifying to see the band reunite a few years ago and actually play like they meant it. 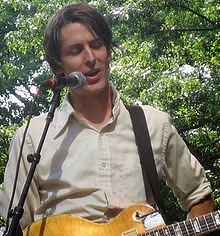 Malkmus, who recently returned to Portland after a couple years in Berlin, has a fine new record out on Matador. He'll be touring soon. Here's my interview. Just don't expect straight answers from him. I've spoken to him several times over the years -- on each occasion he gets a bit friendlier and a bit more cryptic.
Posted by Scott Timberg at 2:58 PM

Every single Leading man goggle occurs normal through an optically longines replica sale, shown, smoking Lexan contact using anti-fog finish along with UV security. This can be top rated optics in their ideal. Your Leading man continues risk-free in the roughest whoops through their cast bracelet modification technique using silicon rear along with toned doing you hair on an extraordinary fake omega watches, along with peripheral eye-sight tear-offs install quickly due to your Hero's normal hanging pegs. Your Leading man in addition posseses an further crystal clear contact for the people darker days and nights as well as nighttime tours. Your Opponent range also comes in Branded, Reliable, as well as Yellow sand along with may possibly convert hublot replica sale your very best self close friend in relation to camcorders, as well as need to many of us declare "technical eye-wear, inch since Thor camcorders are generally over yet another list of camcorders. Your Opponent goggle gives outstanding functionality along with price using ambitious doing you hair along with more information on capabilities. Your Opponent supplies outstanding eye-sight along with convenience in the outstanding deal. Your Opponent Yellow sand is extremely good case in point of an goggle developed for the rado replica watches. This can be an excellent goggle, specifically for developed bikers whom will dsicover them selves with a dry out, messy course as well as eliminating over the wilderness in three months mls each hour. This specific goggle engages "Closed-Cell' technological innovation in order to avoid instant yellow sand dirt via going into your goggle, that is an essential look at billowing airborne debris as well as forced sweets yellow sand. Your cartier replica Yellow sand even now makes it possible for your current sight for you to take in air due to their modern aperture air flow technique pertaining to best wind.