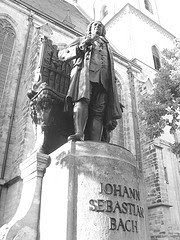 THIS may jar some, but i think it's fair to say that the greatest composer in the history of western music -- all due respect to beethoven, mingus, lennon/mccartney, etc -- was johann sebastian bach... the old man's birthday -- born in 1685, you dont look a day over 300! --- is today.
those with a good memory for interplanetary expeditions recall that bach's music played a prominent role on the voyager golden record sent out with the pioneer spacecraft. in a more modest context, i sometimes use his piano music to cure hangovers: those strict contrapuntal lines really focus a blurred mind.
there are lots of reasons to love bach's work, as anyone who has heard glenn gould's stripped-down interpretation of "goldberg variations" can vouch... perhaps the first classical music i ever fell in love with was gould's very architectual treatment of "the well-tempered clavier." i also love andras schiff (whose live version of "goldberg" is a lifetime highlight for me), murray perahia (whose sensitivity is the opposite of gould's approach), and till fellner (lately my favorite WTC, almost liquid in its lyricism.) ian mcewan has turned me on to angela hewitt. and the emerson quartet does really interesting things with bach in their "the art of the fugue."
to some people, bach's music is scary -- literally. HERE is a piece i wrote for the LAT a few years back in which musicology scholar kristi brown looked into bach's place in cinema. directors often employ bach's music to suggest an insane or dangerous hyper-rational genius, including hannibal lecter.
but forget about all that. tonight, toast the great man with a nice weimar lager (is there such thing?)
Photo credit: Flickr user hotzeplotz
Posted by Scott Timberg at 12:35 PM

The fear Bach instills in me: Almost beyond the beauty and humanity of his music, his greatest accomplishment was his sheer volume of creativity. He wrote more than 200 oratorios! (Beethoven wrote 2) His fecundity was unparalleled (20 children too!).

It has been posited that our minds are encumbered by too much data, which cripples our ability to generate ideas.

Bach walked everywhere. He heard no radio chatter. His life range was about 200 miles. His thoughts were his own, not those thrust upon him by commercial culture.

That is what is to be feared: that great minds may no longer have a chance to exist in any form other than as a carbuncle on the side of artificial cultures such as this one.

I will try to forgive you for comparing Bach to Mingus. Keep in mind that the pace at which Bach wrote (see above) was about the same as improvising. In their careers, Lennon-McCartney wrote about as many good tunes as Bach did in about any 2 of his 200 oratorios - and then Bach made fugues of them.

interesting -- i share this correspondent's awe at bach's heft and fecundity... tho i lament less about the distracting powers of contemporary life (baleful as they are.) some artists have made beautiful music, or wonderful films, or penetrating novels, out of the same cultural noise that may preclude our world from every producing another bach.

as for the mingus likening: i admit to opening the door with my puckish comparisons, but i find trying to equate merit across genre lines to be generally fatuous... what is better, rubber soul, or citizen kane? a picasso painting, or a really good steak? this kind of thing doesnt tell you anything.

and if i may add, re bach vs. mingus: much as i love goldberg variations and other bach pieces, i'm very glad to also have my mingus records and will be until someone finds the lost sides of eric dolphy jamming with bach's first band....