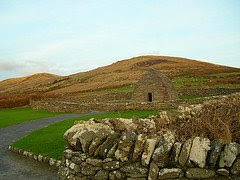 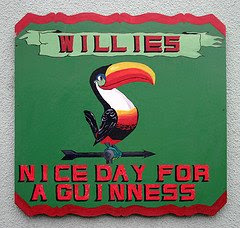 TODAY this blog and its followers celebrate st. patrick's day, a holiday a lot of upper-middle-class people -- including many educated irish-americans -- scorn. slate ran its usual spoilsport/ contrarian piece pointing out that patrick himself didnt rid the country of snakes and wasnt even irish.
i've read this story (which is quite well executed) ever year, and still love st. patrick's. i say this as someone with no interest in green beer, working class homophobia or the slavish worship of the catholic church. but despite my jewish surname i am mostly irish (full disclosure: half of that derives not from heel-clicking celts but from protestant oppressors) and this holiday is one of the few opportunities to connect with a heritage that now seems very remote from the life of southern california. when i was in the trader joe's in glendale a few days ago and asked after the corned beef, a young woman working the floor looked at me as if i had asked for kelp from saturn. of course, in the days of mulholland and doheny, LA was a very irish city.
these days, ireland itself has snapped out of its "celtic tiger" phase and has an unemployment rate of around 10% -- bad for them, tho a touch lower than LA county right now. (here is a great simpsons bit on irish identity.)
but that's another discussion. for now, i am wearing a pine-green american apparel shirt, have a big pot of corned beef simmering away in murphy's stout upstairs, i am going to blast van morrison until my wife makes me take it off, and will try to steal a few minutes to read yeats after introducing my little son to what i hope will stick as an important family ritual. for the timberg/sinnott family, this one goes back to turn-of-the-century, brooklyn -- long ago and very far away. as ian (sorry for the scottish name) would say, CHEERS!
PS. A poll of the world's greatest irishmen to appear very shortly on this blog. i apologize in advance for it being all male, esp since the best irish writer going right now may be anne enright... simply amazing how many great musicians come from this tiny island, esp if you consider, as i do, john lennon and morrissey -- both of irish-catholic descent -- the greatest "english" musical figures of the '60s and '80s, respectively.
Photo credit: Flickr user 36 and 37
Posted by Scott Timberg at 3:53 PM

I take it that I will be on that list of greatest living Irishmen. Wonderful ;posting, my dear part-Irish friend (but I thought there was Scot in there as well.

the scot is hiding his head today and herding sheep...