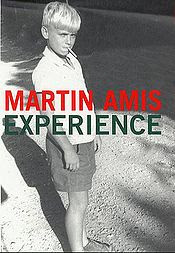 While he's dropped out of sight a bit recently, martin amis helped put his generation of british writers on the map with brilliant novels like "the rachel papers" and "money." his memoir, "experience," with much about his father kingsley amis, is something close to a masterpiece, and i'm a longtime fan of his essays and criticism, especially those collected in "visiting mrs. nabokov."
i've spoken to amis several times, a wittier man you will never meet. today the onetime enfant terrible, now grandfather, turns 60. he now teaches in one of my favorite english cities, manchester.
Here is my piece on amis from a few years, when he was laughing off the savaging he'd gotten in the british press over "yellow dog." he was getting ready for an event at UCLA's royce hall, with christopher hitchens. after amis went back to his hotel, hitch invited me for a drink -- i had iced tea, he a double of johnny walker. it was noon.
Either way, Happy birthday.
Posted by Scott Timberg at 2:50 PM No comments:

THERE'S something genuinely -- and not just fashionably -- retro about joe henry, an artist who keeps us guessing about where he'll go next but stays deeply rooted in the american past.
i could have spent all day talking about music with henry -- about the portrait of billy strayhorn over his piano, for instance which he compares to the "what would jesus do" bracelets christian teens wear. but he probably would have kicked me out of his super-cool brick-and-stone basement studio.

my story, from today's LATimes, was mostly about his new album, "blood from stars." but we also discussed two of my favorite R&B records -- solomon burke's "don't give up on me" and bettye lavette's "i've got my own hell to raise" -- both of which joe produced.
we started out speaking about delta blues players like son house, robert johnson and skip james. "to me, it's like reading keats or blake," the singer/guitarist said. "it takes god, sex, love and death and puts them all in the same room."
UPDATE FOR 2010: Joe plays the Largo at the Coronet on Saturday, March 6; great reputation as a live artist.


Photo credit: Anti- Records
Posted by Scott Timberg at 10:06 AM No comments:

Classical Underground Vs. The Philistines 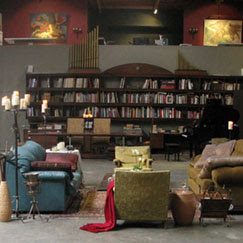 IN my decade and a half writing about artists and cultural figures, i never met anyone as passionate, committed and outright insane for art as alexey steele, a soviet born painter who runs a monthly "classical underground" series in his artists loft. (here's my piece.)
but at first, i thought the whole thing might be a joke -- that alexey, who comes on a little bit like borat (check this out) might be putting me on. "i am overloaded!!" he shouted when i came to see him in an elaborate loft not far from LAX one night. he was wearing a fedora, reeking of sweat, and holding a hammer which he gestured with widly as he made points about art, malevich, the marketplace, and within a minute or two, the power grid was overloaded too: the fan and all the lights in his loft suddenly shut off.
a few minutes later, power restored, he runs off to get us some glasses and a bottle of the excellent angel city beer. cue broken glass. "sonofabitch!" i hear from the next room.
besides some fascinating (and overheated) conversations, alexey also showed me one of the most memorable classical concerts i've ever seen -- a chamber music show that included the first bach cello suite and a prokofiev piano sonata, in a casual warehouse space with near-perfect acoustics. my only hope is that the exposure my times piece brings does not change what alexey and his co-conspirators have labored to offer.
Photo credit: HighArtForever
Posted by Scott Timberg at 2:47 PM 6 comments:

YESTERDAY would have been the 40st birthday of elliott smith, perhaps the finest songwriter of my generation, and a musician who killed himself six years ago. my wife -- a longtime music journalist who considers him the deepest artist she's ever interviewed -- and i remember that dark day well.

smith, of course, came up through the portland band heatmiser, and released some powerful and very spare solo records up there before moving to LA... he came to the southland a few years after i did, and i was lucky enough to see him perform several times, as well as to sit next to him at the bar at the troubadour, where he was nursing a guinness and clearly did not want to be disturbed. (i also recall, maybe a year before he died, smith waiting in line behind me in line at amoeba music, with a basket full of vinyl. his girlfriend had to lead him to the register like he was an overmedicated old man.)
HERE is my piece from 2004, in which i interviewed his girlfriend, producer, biographer, and musical friends, and look back at his life and then-controversial death. as sad as i still am to have him gone, he's one of the people who reminds me of how emotionally direct and inventive the music of the indie-rock movement can be. also: as influenced as he was by indie and by the british invasion (especially george harrison), smith was, musically, every bit his own man.
Posted by Scott Timberg at 4:52 PM 1 comment: 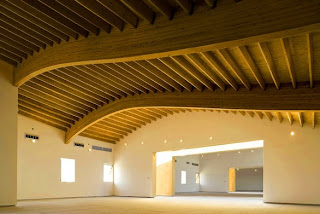 For decades now, eric owen moss has been one of the most innovative, influential and feared architects in the southland. he's designed striking postmodern buildings in culver city and environs, taken the helm at SCI-Arc, and become what colleague thom mayne calls "a gladiator" in his appearances at various panels and reviews.
HERE is my LAT piece on moss and his latest work. the story comes from several conversations with a man whose speaking style i'd call one part free association, one part surrealist poetry, one part yogi berra.
besides his latest projects -- one of which, the gateway art tower, will be completed shortly -- moss was interested in discussing how LA can now lead the world in urbanism (planning, urban design, infrastructure reform, etc.) the same way it led the world in cutting edge architecture in the '80s and '90s.
moss will surely be in the news in the near future because of his controversial plan for a high-rise apartment complex near the beach in venice -- many neighbors are frustrated with the project and this will likely not go smoothly... until then he is very busy, despite the slumping economy, with projects, here and in asia.
Photo credit: Eric Owen Moss Architects
Posted by Scott Timberg at 11:57 AM No comments: