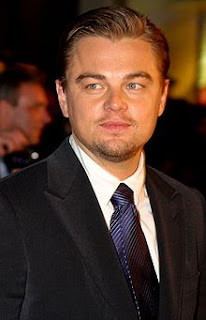 WELL, this is probably a good-news-and-bad-news situation.
Mike Fleming has just reported in Variety that the star of "titanic" and "the departed" has been attached to "the deep blue goodbye," the first of what could become a franchise of films based on john d. macdonald's travis mcgee series. HERE's my previous LAT piece on the project.
here's fleming:
"Chernin joins Appian Way's DiCaprio and Jennifer Davisson-Killoran as producers on a project that has a strong draft by Dana Stevens ("For Love of the Game") that is drawing interest from directors. Amy Robinson is also involved in a producing capacity.
"DiCaprio is in line to play Travis McGee, a self-described beach bum who lives aboard the 52-foot houseboat The Busted Flush, and alleviates his
cash flow problems by hiring on as a "salvage consultant." He recovers property for clients, taking a hefty percentage and getting into a lot of danger and romance in sun-drenched Florida. "The Deep Blue Goodbye," the first of a 21 volume bestselling series, was originally published in 1964."
the goods news is, this brings us a little closer -- after decades of waiting -- to a real mcgee film. it also suggests the studio will spend money on it. decaprio is a real actor who's deepened in his recent work.
but doesn't he seem at least a little bit wrong? too young? too pretty? too sensitive? too internal for the raw-boned floridian?
readers let me hear from you!
Photo credit: Public domain
Posted by Scott Timberg at 4:47 PM 3 comments: 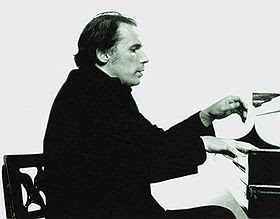 Today would be the birthday of a musician who's nearly up there, for me, with john lennon and john coltrane. like them, he was a force of nature, complicated personally, and a man who left so much music behind i've listen to him every week -- sometimes every day -- for years.

part of what first interested me about pianist glenn gould (1932-82) is that he was a classical musician who rockers, literati, bohos and generalist intellectuals seemed to like: there are depths to him, for sure, but you did not have to understand the harmonic theory behind "the well-tempered clavier" to respond to its velocity and intellectual force.
i've also found, especially in my younger days, gould's treatment of bach to be the best hangover medicine i know.
HERE is my piece, "the cult of gould," from the LATimes. my goal was to round up people who loved gould from outside the classical world, so i found filmmaker john waters, the actress who played Flo on "Alice," and jazz musicians brad mehldau and jason moran. critic time page served as a kind of guide to the piece. (somehow i executed this piece without including a single canadian, which seems wrong.)
moran provided my favorite detail in the story: he went to see "thirty two short films about glenn gould," with a young woman he fancied. when she decided gould was too weird for her, he could never look at her the same way. it was all over between then.
Posted by Scott Timberg at 10:51 AM 3 comments:

SO much of what's supposed to be really funny ends up being just crude, shocking and sophomoric -- sometimes all three. that's why i was so blown away a few years ago when i attended the first national tour of the Found Footage Festival, which came to Hollywood's M Bar, not only was it genuinely hilarious, it was an original turn on both indie/DIY and on the trash-can aesthetic that runs from duchamp through "found" magazine.
there was a lot of great, weird stuff salvaged from the dustbin of history then. part of what i remember was a truly cheesy macdonald's training video for custodians (did you know they used to call them "mc g's," as in, "so you're the new mc g!") also memorable: teen-star corey haim's video boast, "my myself and i," the film of a young austrian weightlifter who would later become governor of california, on a trip to rio de janeiro to dance the samba, discuss his favorite part of the female anatomy, and set world-class groping records. (okay, some of that was crude and shocking, but in a good way.)
HERE is my piece from today's LATimes. The show kicks off tonight; Friday i go to check out the latest installment, which involves a hellish 1987 dating show, at the M Bar.
as i say in the piece, it's like the opposite of a film festival: these guys go seeking out the very worst, and often find it.
Photo credit: Found Footage Festival
Posted by Scott Timberg at 9:55 AM No comments: 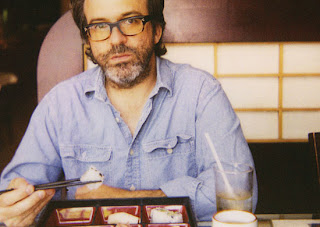 ANYONE who follows indie rock closely knows that songwriter joe pernice isnt kidding when he says, "coming up with melodies is a pretty easy thing for me to do. it doesnt take a lot to get me to do it."
songs like "penthouse in the woods," from '90s alt-country band the scud mountain boys, and "crestfallen," by chamber pop band the pernice brothers, have a melodic perfection that sounds effortless.
writing a novel ended up more daunting, even tho pernice had produced a smiths-inspired novella for 33 1/3 called "meat is murder," which wrapped '80s nuclear dread, catholic school, and adolescent angst into the same brief package.
his new novel, "it feels so good when i stop," is a black humor tale of gen x disorientation. set mostly in cape cod off season, it's one of the best glimpses at young men and their relationship to music since nick hornby's "high fidelity."
HERE is my LATimes story on pernice, for which i spent some time with the musician (in a bad airport hotel) and spoke to "little children" / "election" author tom perrotta.
pernice has also released a cd he calls a soundtrack: even though almost none of the songs are by him, it's my favorite work of his in years. he makes a case for songs which have lodged themselves in the collective unconscious without really becoming classics: sammy johns' "chevy van," tom t. hall's "that's how i got to memphis," del shannon's "i go to pieces."
Photo credits: joepernice.com
Posted by Scott Timberg at 7:51 PM No comments:

John Updike vs. Witches of Eastwick 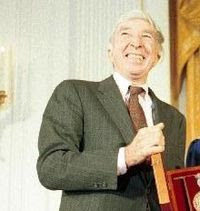 FOR a not terribly good book, "the witches of eastwick" has had quite an afterlife. not only did it become a popular, if faintly cheesy, movie involving cher, and a briefly lived stage show, but it's now set to become a television series. no, not a miniseries -- but a show that could run for years and years.
why? i'm still a bit confused about the whole thing. but HERE is my new piece on the book's unlikely journey.
for the story, i spoke to a producer on the show named maggie friedman, who pointed out that "men and women and sex" are important ingredients to making the book -- and her show -- work.
and i discussed the original novel's impact and sexual politics -- is it feminist? misogynist? an indictment of the counterculture -- with scholars quentin miller and sam cohen. the latter has a new book coming soon called "after the end of history: american fiction in the 1990s."
what do people make of the program of "eastwick?" i'm eager to hear from viewers. the show kicks of wednesday.
Posted by Scott Timberg at 1:39 PM No comments:

Ken Burns vs. His Critics 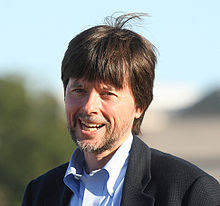 AS a former (and very minor) member of the nation's conspiracy of jazz critics, i remember quite well the vitriol hurled at ken burns for his "Jazz" documentary. the UK's guardian, for instance, called the series, for its treating jazz like an art form that died with ellington, "a jam session in a mausoleum."
in some cases the charges were fair, in other cases not.
in any case it struck me that burns was experiencing a critical backlash, an exhaustion of the good will that had built up with "the civil war" in the early '90s. compared to hipper/angrier figures like errol morris and michael moore, the earnest burns was deemed as cool as his famous bowl haircut.
HERE is my piece on what may greet his new "the national parks: america's best idea."
i met burns not long ago to discuss his new project, his early work, and his critical reception. i like him a lot, a very intense guy who's willing to get swept away in a story, its characters and conflicts. anyone who helps bring more attention to john muir cant be all bad.
Posted by Scott Timberg at 11:03 AM 1 comment: 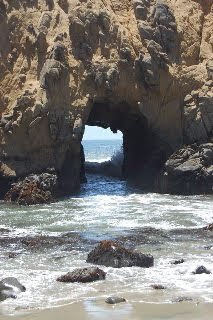 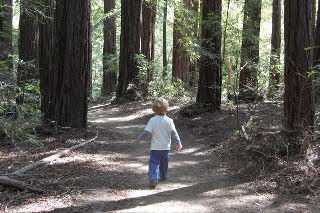 "NO major American poet has been treated worse by posterity than Robinson Jeffers," poet/critic dana gioia wrote in 1987, lamenting the lack of scholarly attention, an up-to-date selected poems, or a full-dress biography of this california writer who was once read voraciously and still inspires environmentalists.
a few things have changed since then, but the great poet of california's central coast is still widely overlooked. HERE is my humble attempt to try to bring this austere and charismatic man some attention. this is basically a travel piece about big sur and carmel, but with jeffers's life, work and times -- mostly the 1930s -- providing the framework.
so we visited Tor House -- the stone house jeffers had built, and the tower he built, almost single-handedly, for his wife by rolling stones up from the pacific -- the point lobos state park he captured in verse, as well as the henry miller library, dedicated to a writer who knew and admired jeffers.
while watching at the pacific's waves slam into the towering rocks, it was hard not to be struck with jeffers' vision of the california coast as both the geographic end of western culture's grand experiment and a renewing source for it.
Posted by Scott Timberg at 10:37 AM 2 comments:

EAGER to meet fitness guru richard simmons? what about reliving eighth grade? nostalgic for your high school prom? how 'bout driving across country powered only by dirty fry oil?
my answer to all of these questions is a resounding NO, but to some authors more successful than yours truly, these stunts and others have resulted in new books, some of them big hits. HERE is my LA Times piece on a.j. jacobs, self-help skeptic beth lisick and several others who've put out high-concert gimmick books. they're like the bastard spawn of george plimpton's "paper lion."
in the piece i speak to jacobs, whose voice sounds a lot like arnold horshack's, iowa prof robin hemley, whose book "do over!" takes a middle-aged father back to some painful early experiences, and veteran publishing observer sara nelson. why here? why now?
(HERE is a new story i wrote for the louisville paper on jacobs himself.)
now excuse me while i return the igloo where i have chosen to spent all of 2009...
Photo credit: ajjacobs.com
Posted by Scott Timberg at 2:02 PM 2 comments: