Christopher Hayes' Twilight of the Elites

OVER the last year or two, I've given myself a crash course on social criticism -- wonderfully grim and eloquent books by Bell, Ehrenreich, both Packers (Vance and George) and various "mass culture" theorists of the '50s. I hope to get into some of them over the next few months. 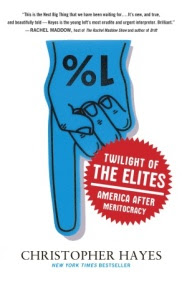 One of the best of them is Christopher Hayes' Twilight of the Elites: American After the Meritocracy. I'm often stirred or intrigued by a book, but it's not often that one really changes the way I think. Hayes's book, which looks at the meritocracy that followed the WASP establishment, is one of a very short list. He considers how a system that supposedly rewarded talent and intelligence helped lead us into the Enron debacle, the mishandled Middle Eastern Wars, the Great Recession, baseball's steroid scandal and the mess that is the Catholic church.

I should say that the premise of this book very much goes against my grain: I've thought over the years that belief in a meritocracy was what my family had instead of religion or a sense of ethnicity. But reading Hayes argument and reflecting on how nasty the 21st century has been made things look different. (The book has recently been released in paperback.)

If you still have bitter memories of Judith Miller, Dick Cheney, Bernie Madoff, the cardinals who looked the other way during the pedophile scandal, and so on, Twilight of the Elites will help you make some sense of it all. They're the new "best and brightest," and just as fatuous and dangerous as Halberstam's gang that got us into the Vietnam War.

HERE is a Salon Q+A with the author by my friend David Daley.

Posted by Scott Timberg at 3:55 PM No comments:

Willie Nelson at the Hollywood Bowl

SOME years, concerts at the Hollywood Bowl become the highlight of the summer. I know I'll miss a lot of things about Los Angeles whenever we end up departing, but these night with the sun setting and the scent of eucalyptus from the canyon will be very near the top of the list. 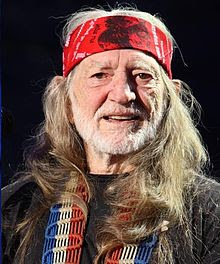 This year, we've only been twice so far. We saw the fireworks on the 4th of July, a show at which I learned that Josh Groban is not the anti-Christ (and you can quote me on that.)

Our second visit was for Willie Nelson's show on Saturday night, which was devoted mostly to 1978's Stardust album. I know I'm not breaking any news to say that the show was damned good -- Willie has long been one of the most consistent major artists. Even with what at times could be heavy orchestration (conducted by Beck's father, who has a smile and body language eerily like that of his son), the richness of Willie's voice came across quite well. (The tones of his battered classical guitar, which makes Glenn Hansard's Takemine look brand new, came and went during the first song or so, but showed up quite well thereafter.)

Stardust, of course, was Willie's throwback standards record, a real about face after albums like The Red-Headed Stranger. We are now, 35 years after its release, about as far from Stardust's original appearance as it was from the American songbook -- "Blue Skies," "All of Me" -- that inspired it: It's doubly retro. The highlight for me may've been his reading of "Moonlight in Vermont." Some non-album tracks -- "All the Things You Are" -- were also strong. One of my favorite of his songs -- "Funny How Time Slips Away," the brilliance of which I was recently reminded by the L.A. band Spain -- seemed rushed. This is a number about regret and the perspective time offers. It needs room to breathe.

This said, that was about as good a show by an 80 year-old as any of us deserve. What a titan. 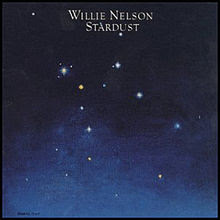 Texas troubadour Lyle Lovett opened. Your humble correspondent has been an admirer, in theory, of Lovett for a long time. But I've always wanted to like his recordings -- which represent an attention to detail, a worship of Townes Van Zandt, a literate take on the country-folk tradition, etc. -- more than I do.

The Bowl show really won me over. Part of it was Lovett's banter and stage presence -- here's someone who really loves doing this, and was especially honored to be opening for St. Willie. I loved his fingerpicking as well. But to large extent it was the way Lovett handled his band -- a bunch of great players, and everyone got room to take a brief solo on almost every song. It was like a great jazz band playing country -- Western swing at its best.

What the hell happened to the shuttle bus back to the LA Zoo, though? Something clearly went terribly wrong.

Posted by Scott Timberg at 2:21 PM No comments:

The Runaways: Queens of Noise

THESE days I am digging Queens of Noise, the new book by Evelyn McDonnell, onetime Village Voice rock critic now settled in Los Angeles. The book, subtitled The Real Story of the Runaways, looks at the ‘70s LA punk/hard-rock band best remembered, probably, for a teenaged Joan Jett, the song "Cherry Bomb," and some pretty amazing feathered hair.

I’ve admired McDonnell’s work for two decades now, and have since gotten to know her a bit, and for a year taught more-or-less alongside her at Loyola Marymount University, where she is a professor of journalism.

Here’s my conversation with McDonnell about Queens of Noise, which she will discuss at Book Soup on Wednesday.

What drew you to the story of the Runaways?

It's a great rock'n'roll story that had only been told in parts, and seemed well past due for a complete treatment.  I also saw it as a narrative that's bigger than music: It's a coming of age story about young women crossing boundaries and expressing themselves — their sexuality, their anger, their rebellion, their fears — in ways that hadn't really been done before. There were girl bands before the Runaways, but none of them had the kind of exposure (so to speak) and global experiences that these musicians did, at a pretty young age. It's also a peek into a fascinating, rich time and place: Southern California in the mid-'70s. There are all the elements of a great story, period, in Queens: tragedy, comedy, mystery, drama, sex, drugs, crime, etc. With an awesome, under-appreciated soundtrack.  As a woman just a few years younger than the Runaways, with my own California roots, and a deep love of music, I also personally related to their saga.

You describe the band members as creatures of the Sprawl. Give us a sense of what early-70s Southern California – the world that made the Runaways – was like.

This was a period when the California dream epitomized by the Beach Boys was wearing thin — fault lines were rupturing. Decades of incredible population and economic growth had slowed precipitously; there was Watts, Manson, smog, overspeculation, etc. The members of the Runaways lived miles apart from each other in this car-dependent Exopolis. They were suburban girls, from the Valley, Orange County, Long Beach. But LA also had Hollywood, which was not just a place of Tinseltown fantasies: it was a bohemian mecca for all the outcasts and weirdos, for the queer kids and the runaways (small and big R). It was a place for experimentation (with drugs and sex), for hedonism, for liberation and libidos, and for exploitation. It was a place to escape those suburbs, and it's where the Runaways came together.


How much access did you get to the musicians and to band manager Kim Fowley? Did all the major characters speak to you?

Within the first few chapters of the book, you write about the debate between architecture scholar Reyner Banham and art critic Peter Plagens on the nature of LA, and get into the work of Joan Didion, William Gibson, and others. What’s the right amount of context in a book like this?

As I said, I saw this as more than just the story of one band: I also saw it as an important, emblematic piece of cultural, social and feminist history. Those contextual pages are a tiny sliver of the book. I think they give the book a bigger, broader meaning and perspective, but some critics seem to feel you can't take a band like the Runaways that seriously. It's an anti-intellectualism that seems strange to me as a fan of Greil Marcus, Ellen Willis, and Jon Savage, but is rampant in rock-critic criticism.

How do the Runaways fit into the history of women in rock?

They were clearly pioneers, in terms of the scope of their accomplishments at their age and in a relatively short period of time: five albums, multiple national and international tours, magazine covers and hit records (in some countries). Obviously, there were girl vocal groups that preceded and outsold them. And there were other bands where women played instruments — some great ones, like Fanny and Isis. But the Runaways achieved a level of at least notoriety, and also genuine success, that had eluded other bands. Obviously, some of that was based on the fact that they were not shy in their sexual presentation, and in that sense, their legacy is mixed.

Looking back, almost four decades later, what is the band's long-term influence or legacy?

Because of Joan's and Lita's subsequent success, the Runaways have been taken more seriously in retrospect than they were during their brief career. Whereas some of the early female punks repudiated them, later generations — from Riot Grrrls to the Donnas to Miley Cyrus — have been more sympathetic to the barriers they faced and how they faced them. They were a key transitional figure in the evolution of both punk and hair metal, particularly in Los Angeles. They were friends with and peers of the Sex Pistols and the Ramones. But although those bands were clearly just as Svengali-driven and gimmicky, they always get taken more seriously. I think the Runaways' legacy is up there with those bands, and deserves to be acknowledged.

Posted by Scott Timberg at 2:58 PM No comments: