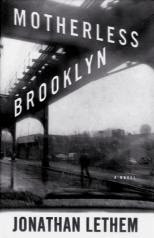 Ted, who also writes on the blues and runs the blog Conceptual Fiction, which looks at the intersection of literature with fantasy and science fiction, has just launched Postmodern Mystery: New Angeles on an Old Genre.
He’s already posted on Borges’ Ficciones, Pynchon’s Lot 49 (!!), Flann O’Brien’s The Third Policeman and Nabokov’s Pale Fire.
This week, Ted writes about one of our favorite contemporary novels – Jonathan Lethem’s Lew Archer-with-Tourette’s novel Motherless Brooklyn.
Here’s what Ted Gioia tells The Misread City about the impetus behind the new blog.
There is a disconnect going on in the literary world when it comes to genre fiction.  These books have traditionally been marginalized or ignored by literary critics, academics, and even book reviewers.  Yet some of the most creative works of modern fiction draw on genre elements, either openly or subversively.
When I launched my Conceptual Fiction web site two years ago, my aim was to celebrate some of the finer works of science fiction and fantasy, both straight genre works as well as literary fiction that drew on genre elements.  But I realized that the mystery genre was also widely misunderstood.  It had inspired a large number of intriguing, and often explicitly experimental works in recent decades -- books that turned genre formulas upside down and inside out.  For the last 18 months, I've been working on my new site Postmodern Mystery (www.postmodernmystery.com), which finally launched on October 7.
My Postmodern Mystery site looks at unconventional and experimental stories of crime and suspense.  Readers might be surprised to learn how many of the leading fiction writers of recent decades have drawn on elements of the mystery genre for their works.  My site has essays either published or soon-to-be-published on books by Jorge Luis Borges, Paul Auster, Vladimir Nabokov, Robert Bolano, Alain Robbe-Grillet, Leonardo Sciascia, Thomas Pynchon, Friedrich Durrenmatt, Flann O'Brien, Gabriel Garcia Marquez, Jonathan Lethem, Thomas Bernhard, Truman Capote, Haruki Murakami, Gilbert Sorrentino, Witold Gombrowicz, Michael Chabon, Miguel Syjuco and a dozen or so other authors.  Soon I will be publishing a complete reading list and survey essays tying together the various threads of this body of literature.
I hope the site will spur a few people to read some fine books they might otherwise have missed.  But also I'd like to challenge conventional views of what constitutes important literature.  I believe that a shift is already underway.  Strange to say, the writers already understand what is happening.  If you have any doubts, just look at the works of a Jonathan Lethem or a David Mitchell or a Michael Chabon.  They understand that the longstanding division between literary fiction and genre fiction is both arbitrary and misguided.  I'm aiming to make the same point, but via a body of criticism.
Posted by Scott Timberg at 5:45 PM