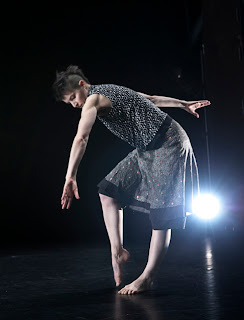 A DARING and musically radical dance piece is coming to REDCAT next week. I imagine there is so much avant-garde work coming regularly through this little performance spaced nudged into the corner of Walt Disney Concert Hall that many of us tend to take it for granted. But this piece -- trembler.SHIFTER --   sounds truly rad, as the kids say.

I had the chance to correspond with the piece's choreographer -- LA's own Meg Wolfe, a former denizen of the Lower Manhattan scene, who collaborates here with composer Aaron Drake -- about the work that's influenced her own. (I am writing the LA Times' Influences column most week.)

And for space, the published story omitted the most surprising and perhaps distinctively LA of her influences. She chose the film Miracle Mile, which she calls "a crazy movie from 1988."

Wolfe writes: "I watched this early on when I was starting the project and feeling particularly apocalyptic, on the suggestion of costume designer Marcus Kuiland-Nazario. The color scheme! Mare Winningham's hair! L.A. missed connection sappy love story, nightmare end of the world pile-up on Wilshire Blvd., and death by La Brea Tar Pit... it could be all too real."