Mostly, Martin Scorserse is associated with rock 'n' roll, especially the early Rolling Stones and Phil Spector. But he's turned out one of the best contemporary-classical soundtracks in history with the music for Shutter Island.

A lot of people, some of them licensed film critics, really didn't like Scorsese's new film, which stars Leo Di Caprio investigating a home for the criminally insane swept by wind and rain in Boston Harbor. (Okay, okay, I've heard from all of you by this point.) 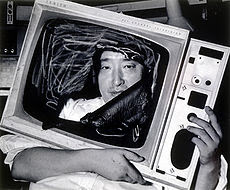 But the film, whatever else it does or doesn't do, set longtime Scorsese friend Robbie Robertson free to round up a fairly grim and quite adventurous musical assortment that goes way beyond the usual atmospheric or Bernard Herrmann ripoffs that often accompany psychological thrillers or horror films. Because the film is set in the early '50s, just before rock music's emergence, and there is a wartime Europe backstory, a baffling John Cage tribute by Nam June Paik (pictured) makes a lot more sense than "Jumping Jack Flash."

Here is Mark Swed's excellent piece on Robertson and the film's music in today's LAT. (I like what he says about the movie's marketing as well.)

I'm especially pleased to know the RR was behind the mix. Scorsese's The Last Waltz, about the final concert by Robertson's old group, The Band, was the first serious film about music I ever saw: My dad took me to see it at the Brattle when I was 10, I think. (I was not, coming in to this, happy to be led to a film about waltzing, but went because it was paired with "Singin in the Rain.")

Also pleasing to see so many West Coast composers -- John Adams, Lou Harrison, John Cage -- and other favorites like Alfred Schnittke and Brian Eno (who really should have collaborated, by the way.)

One of only a few non-classical pieces is Lonnie Johnson's rendition of "Tomorrow Night," which some of you know from Elvis's Sun Sessions. Again, a triumph of good taste... Who's cooler than Lonnie Johnson?
Posted by Scott Timberg at 11:38 AM

Thanks for passing this on ... I now am tempted to see this. The film has what may be least appealing trailer of any movie that doesn't star Vin Deisel, but my old friend Comrade Schnittke was perhaps the most cinematic composer of my lifetime.

the film is better than its trailer... i may weigh in on the sharply divided reviews at some pt soon...

Thanks for the update on what Robbie Robertson is up to these days. I'm a The Band fan from forever. Saw them live in Montreal.

Re: Shutter Island, I thought Leonardo DiCaprio saved the movie. But he was so good that everyone else came across as anemic. Nice period sets. I'd give it a B-.

Changing gears, the new Polanski movie The Ghost Writer is fantastic. I'd say equal to China Town. And all the actors played with equal weight.