This week sees the reissue of The World Inside, a long-obscure science-fiction novel that could become a miniseries on HBO. 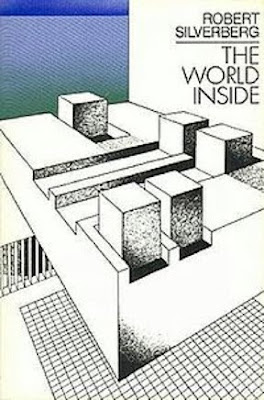 Of course, it's delicious to think of this hyper-urbanized future world -- in which people live in 800-story apartment complexes and have sex whenever they want -- serving as the setting for the next Deadwood or The Wire.

The novel's author, Robert Silverberg, is a veteran sf writer who really his his stride in the early '70s, around the time he moved to Oakland, where he still lives.

He's aways been a bit of a contrarian, and during the field's late '60s/early '70s period, much of sf was especially left wing. Silverberg has framed himself in contrast as a Burkean conservative with a respect for tradition, allegiances to traditional "high" culture and libertarian leanings.

With books like The Population Bomb and other expressions of Malthusian dread appearing in this period, Silverberg released a novel in which people have adapted to overpopulation and live with it more or less happily.

Here is my piece on The World Inside for io9, which includes a brief interview with Silverberg. And here an earlier (and broader) LA Times profile of the author, tied to the reissue of another "lost" early '70s classic, Dying Inside.
Posted by Scott Timberg at 12:05 PM

Since I was turned on to this site by a plug on Ragged Thots, Robert A. George's blog, you have never steered me wrong. Although he was already on my to-read list, you prompted me to get on with reading Junot Diaz. Then you turned me on to Michael Dibdin, whose existence I was not aware of. I just finished reading Dead Lagoon with great enjoyment. Aurelio Zen is a guy who does everything right as a cop, and everything wrong as a human being. I can relate to that.
I find that I already own The World Inside. I picked it up on a whim at a public library used book sale, but have never read it. Now I shall. Another novel, perhaps on a loosely related theme, that I also bought at a library sale was We by Eugene Zamiatin. I did read this one. It supposedly influenced Orwell's writing of 1984.
I'm sure that I'll enjoy the Silverberg as much as I have the other fiction you've brought to my attention.

Hope you enjoy Silverberg, Rodak. I think even the author himself would agree that this thin novel does not quite measure up to We or 1984 -- those are adamantine classics.

But Silverberg has his own flair, and the ability to illustrate ideas without his books becoming endless rounds of forced dialogue.

I should mention that I'm also reading Red Mars, which I highly recommend to anybody, whether usually interested in sci-fi, or not--another title that you turned me on to. Silverberg will have to wait on deck for bit, but he will get his turn at bat.

I finally got around to reading The World Inside. It's an interesting novel. I'm glad that you prompted me to read it.
My take on it is that humanity, in its endless adaptibility, will produce just about as many malcontents under one set of conditions as it will under any other. This story centers on a super-achiever who finds that status, celebrity, and professional success, combined with a good home life aren't enough. We see his kind around us now. He's kind of an "urbmon Tiger Woods," perhaps?