WHEN I put together a blog poll on Best California Poet, I was certain Charles Bukowski was going to barge in, whiskey bottle in hand, and run away with it. 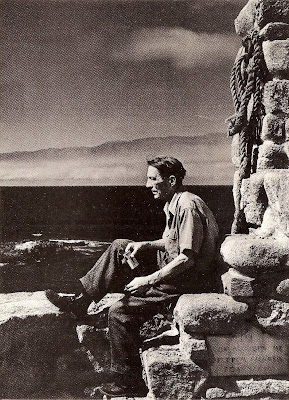 So I’m pleased to report that a far more significant poet ended up winning – and by a landslide. Take a bow, Robinson Jeffers!! He not only presided over the best turned-out vote in the history of The Misread City, he won by nearly as large a margin as Jimi Hendrix did in my Favorite Guitarist poll.
Of course, in most circles, the great poet of Carmel and Big Sur is still largely unknown – as is the runner up, Weldon Kees, who drew nearly double the votes Barfly garnered.
Jeffers – a classically flavored poet of wide-open spaces and the expanses of the Pacific -- and Kees – a jazz-loving hipster who (probably) threw himself off the Golden Gate Bridge in 1955 – could not be more different. But I’m quite honored to have both of them championed by readers of The Misread City.
“No major poet has been treated worse by posterity than Robinson Jeffers,” Dana Gioia wrote in his essay “Strong Counsel,” going on to describe his embrace by environmentalists and general readers and his neglect by literary scholars.
“More than any other American Modernist Jeffers wrote about ideas – not teasing epistemologies, learned allusions, or fictive paradoxes – but big, naked, howling ideas that no reader can miss.”
Dana and I disagree on a number of things, but Jeffers is one place where our tastes come together, and we both love Tor House, the poet’s domicile in Carmel.
U.S. Poet laureate and poetic minimalist Kay Ryan also drew a good number of votes, while Kenneth Rexroth and Lawrence Ferlinghetti did less well.
This poll, like all of them, drew protests for who was not included. As I sometimes say, running a poll with too many choices is like throwing a party in a house with too many rooms – you need some compression so people will come together. Still, I wish I’d put Gary Snyder in here instead of Ferlinghetti – Snyder’s career has continued to evolve and deepen, and he will probably be part of my next literary poll.
As for Buk, I have nothing against the guy, and like some of the work okay. No doubt he would be more fun to hang out with than Jeffers, who was often cranky and very austere in his tastes. But much of the cult of Bukowski, I think, turns on the American romanticism of alcoholism. All of the other poets on the list have earned their reputations from something more substantial. Here's to them.
Posted by Scott Timberg at 10:35 AM

Once again you and TMC raise consciousness, promote and expand the cultural horizons of those lucky enough to read your blog as well as provide a forum to discuss wonderful people and subjects.
Thank you.

Had you included Gary Snyder, he'd of had my vote. I rank Rexroth high because of his translations; Bukowski because of his distance from the academy.

Rexroth will be the subject of an upcoming book late this year or early next. Fascinating, polymathic guy -- I will document it on The Misread City.