Ian McEwan, Past and Present

THE new Ian McEwan novel, Solar, has just been reviewed in the New York Times, where Michiko Kakutani calls it both his funniest novel yet -- similar to the satire of David Lodge -- and a failure at the level of plot. 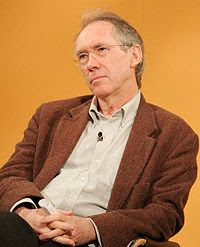 It makes me recall (chin-stroking music, please) the time I spent by with the shy and gracious British author in front of a fire at New York's Gramercy Hotel one drizzly spring day. We spoke about his then-new novella, Chesil Beach (slaughtered by the same NYT reviewer, by the way), England's grand tradition of literature about repression, the glories of John Mayall's Bluesbreakers, and his excitement at discovering American writers like Pynchon and Roth during a particularly dreary period for British and European fiction.

That interview is here. Looking forward to checking out Solar (which also happens to be the name of one of my favorite Miles Davis songs.)  I also spoke to McEwan about the film made from his novel Atonement and will post that one of these days.
Posted by Scott Timberg at 11:41 AM

Could not have said it better myself.