THE great, idiosyncratic writer, whose esteem has surged in recent decades, died 28 years ago this month. 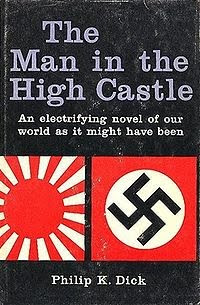 HERE is the new link on Hero Complex that gets you to all six parts of my look at the author's decade in Orange County.

My series considered Dick's life and work, and tried to get at what kind of impact a conservative suburban region would have on a man who had spent most of his life in Bay Area bohemia. How did having a relatively settled period of his life change the man and his output?

I just finished rereading The Man in the High Castle, the author's first hit and sole Hugo Award winner -- a novel that looks at an alternate America in which the Axis powers win World War II, with the Nazis and the Japanese dividing most of the country between them.

I was struck by a) how well it stands up, b) how rigorous the history behind it is, c) how many different character's point of view the novel is told from, in contrast to Dick's later work.

Will be continuing to go back through the many novels and stories of this singular figure.
Posted by Scott Timberg at 10:21 AM

PS. Thanking you for making me aware of THE CLIENTELE, loving all 3 albums I've gotten. Good job!