THE strange case of Amanda Knox -- a cute American exchange student accused of killing her British roomate -- just took a yet stranger turn as she was convicted of the murder as part of a bizarre sex game. (She is sentenced to 26 years in prison; the family will appeal.)

The fact that this took place in Perugia, the capital of the lovely and green Italian region of Umbria, known as the land of the saints -- is only element that makes me think of the consummate Italian noir writer, the late Englishman Michael Dibdin. In fact, Dibdin even taught at the University of Perugia, where Knox studied -- he set his first novel, "Ratking," there -- and settled in her hometown of Seattle before he died in 2007.

Dibdin captured a tone of weirdness and irony so well, and perhaps because he was a foreigner, could see through Italian charm -- and unravel Italian bureaucracy and political intrigue -- like a great cultural critic.

HERE is my LAT story on the author and his work. Part of what's fascinating about Dibdin's career is the way it demonstrates -- as Pico Iyer has so eloquently observed -- the strength and flexibility of the Chandleresque detective novel (born of course in LA) in wide-ranging international settings.

For those new to Didbin's work, I'd recommend that debut, or the more poltical "Medusa." 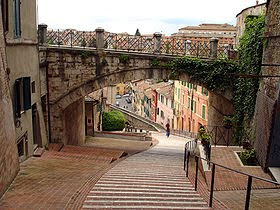 This Knox case is likely to get stranger still, I'll bet.
Posted by Scott Timberg at 6:44 PM