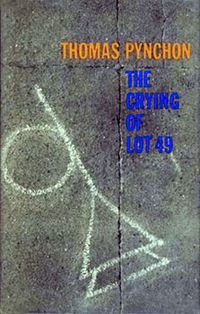 ONE of the highlights of the Guadalajara International Book Festival -- devoted this year to the literature of Los Angeles -- was a panel considering Thomas Pynchon's California Trilogy. This means "The Crying of Lot 49," his shortest and perhaps finest novel; "Vineland," set largely in Mendocino County and perhaps his slightest work; and "Inherent Vice," a neo-noir set in the South Bay at the end of the '60s.

(Here is a piece I wrote not long ago on Pynchon, Denis Johnson, Salinger and other reclusive writers.)

The conversation -- moderated by obsessive Angeleno David Kipen, with postmodern LA novelist Mark Danielewski and Brit noir-head Richard Rayner -- was largely speculative, in part because of the lack of solid information about Pynchon's life story. (As Danielewski -- who has had just come from a panel on Bukowski that had trouble getting away from the barfly-poet's life story -- points out, this obscurity has the effect of focussing most discussion of Pynchon where it belongs, on the work itself.)

Both panelists recalled picking up copies of "Gravity's Rainbow" (in which LA makes a brief but important appearance) and being simultaneously baffled and attracted -- the American author thought it must be written by an Englishman, the Brit was struck by how distinctly American it was. The style, said Rayner, was "both relaxed and incredibly tight, slangy and elegant."

Rayner also worked to show how approachable TP can be, pulling out a passage, set on the Berkeley campus. "The guy just writes killer sentences," he concluded. "He's fun -- he's a comedian."

Danielewski discussed some of TP's influences -- Dickens, South American writers, Rilke, detective fiction going back to "Oedipus Rex" -- and asked, how effective a social critic is Pynchon? (Quite, others concluded.) He sees TP's enduring themes as "trust, loyalty and betrayal," and the search for the informant who will betray the other characters to "the system," however that's conceived.

Overall, Rayner said, Pynchon's work is "fascinated with the idea of what America could have been... what America has lost" -- with California as a metaphor for all that.

(Those who know me are aware of how powerfully swept away I was by the novelist as a young man and of my brief, er, unrelated experience with the Pynchon family.)
Posted by Scott Timberg at 1:55 PM

It would seem that we also share an appreciation of Denis Johnson.

Btw, is it mere coincidence that "Inherent Vice" includes a character named "Denis" which we are told is pronounced to rhyme with "penis?"