ONE of the exciting things in music this year was the excuse a 50th anniversary gave to us jazzheads to return to what I consider the best year ever in the history of the art form. Okay, I know that sounds like something between an advertising slogan and a gloomy denial of the ensuing 50 years. But in a year when Miles Davis, John Coltrane, Art Blakey, Dave Brubeck, Ornette Coleman, Bill Evans, Charles Mingus, etc. were all punching at their respective peaks, it's hard not to miss it.

The winner of this blog's poll for best 1959 jazz album, of course, was Miles' "Kind of Blue." HERE is a link to my Sunday LATimes piece on that album and its musical / cultural context.

Sony has reissued that masterpiece as well as several others in expanded editions this year. The 2-CD versions of "Blue," Brubeck's "Take Five," "Mingus Ah Um," and Olatunji's "Drums of Passion" -- which the late great dj/critic Tom Terrell called one of the century's overlooked masterpieces -- make perfect Christmas gifts.

(I'm happy to say I own the deluxe-anniversary set of "Blue," bigger and alas pricier than the 2-CD version, with photographs of the session and vinyl LPs in addition to outtakes.) 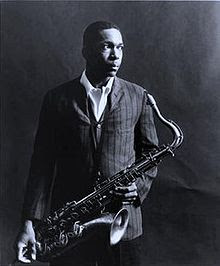 For those of you interested in listening closer to the present, HERE is a best-of-2009 list from Jazz.com's Ted Gioia (author of the truly awesome "West Coast Jazz") which includes albums by Joe Lovano, The Bad Plus and Matthew Shipp. Those three alone make me happy -- as much as I love the old-school cool of 1959 -- for the form's last five decades of evolution.

I'm pleased to see that Gretchen Parlato's "In a Dream" made Ted Gioia's best-of list. I wonder, though, that jazz in 1959 might not have been like music in Vienna in 1800 or so: a sort of historic high-water mark that inspired generations ahead, but was the result of so many cultural forces, it can never been recaptured. As Daniel Barenboim once said of Beethoven, it might be a mistake to see his music as fitting in our world - the truth may be, that we are drawn back to his world.

This article sent me out to acquire the recordings, and initiated a love affair with the jazz of Bill Evans.
As for 1959, the combination of Miles, Evans, Coltrane, Adderly, Chambers, et al., on "Kind of Blue" makes it so special that it's almost trite so say so.

I don't know which cover of "Smells Like Teen Spirit" I like best--the one by The Bad Plus, or this one.