Los Angeles vs. the Gastropub 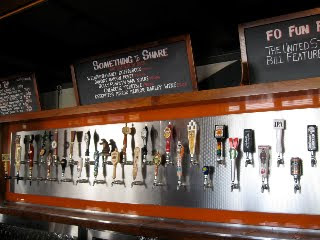 We seem to be in the grip of a full-scale beer renaissance here in LA. It's taken a while to get here -- as beer expert Hallie Beaune has pointed out, Southern California's proximity to wine country and the (often mistaken) impression that beer has more calories than cocktails or wine has held back beer's progress in this slimness-obsessed town. (Even as a wine-lover, I cannot help but think that the nouveau-riche association of wine with "classy" has helped wine and again, hurt beer.)

In any case, beer is here, and places like the Verdugo Bar in Glassell Park, the York in nearby Highland Park, and Father's Office in Santa Monica and Culver City remind me why I like the stuff so much. (And why Budweiser and most American lagers are so meager by comparison with, say, a Craftsman real ale or Scotland's Bellhaven.)

HERE is a piece I wrote for Portland's Oregonian (it comes out on Sunday) that looks at five gastropubs from the Eastside to the ocean. Where's Golden State, with its delectable sweet potato fries? Where's Ford's Filling Station, with its handsome celebrity chef? Sorry guys, I only had five. In my list I was looking for places with strong, unusual beer lists and good-to-excellent food, which I define -- for most of these spots -- as requiring a very fine burger as well as a range of less conventional offerings.

Those with strong opinions should vent them here or hold them for an upcoming poll on the city's best burger.
Posted by Scott Timberg at 2:20 PM