The Return of Morrissey

Thursday night, Morrissey returns to LA for a show at the Gibson Amphitheater, and he just dropped a new collection of B-sides called "Swords" (including a short disc of songs from a Warsaw concert.) When Mozz played Coachella in the spring I wrote about the man and his influence HERE.

I am such a hardcore Smiths fan I ventured to the band's hometown -- Manchester -- and wrote this travel piece about an old industrial city -- the first in the world, in a sense -- reimagining itself. Of course, Manchester -- the setting of "24 Hour Party People" -- was also home to the Buzzcocks, Joy Division and the Stone Roses, and here is my sidebar on the 10 best albums from the city. (By sorta coincidence I also had the good fortune to be married on the man's 45th birthday.) 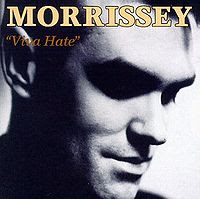 As for the Morrissey show, The Misread City hopes to see you there.
Posted by Scott Timberg at 3:23 PM