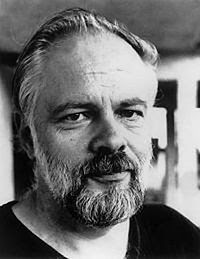 This blog has drifted into Africa and Italy recently, so let me return for a moment to our West Coast home ground: Today would be the birthday of one of America's most intriguing, frustrating and brilliant writers -- Philip K. Dick.

It's hard to know where to start on a figure like this, but let me defer to David Gill, a Bay Area lecturer who runs the clever and instructive Total Dick-head site. Check out his new posts.

Most of you need no introduction to PKD (who lived, sometimes erratically, primarily in the Bay Area and Orange County) or his body of work -- novels like "The Man in the High Castle," "Ubik," "The Three Stigmata of Palmer Eldritch" and movies like "Blade Runner," "Total Recall" and "A Scanner Darkly." He was an important inspiration for everything from "Brazil" to "The Matrix" to "Being John Malkovich." And the careers of many important novelists of my generation -- Jonathan Lethem is the clearest case -- were shaped profoundly by him.

Even the mighty Thomas Pynchon bears his stamp.

These days I am reading and rereading a lot of the work of this author who LA's Steve Erickson helped save from obscurity, Art Spiegelman called the Kafka of the late 20th c., and who Ursula Le Guin called "our own homegrown Borges." So I'll leave the rest of my thoughts to a piece I think will drop next month -- which I hope will be the first of several.

I read some of Dick's work as an SF-loving teenager. Not all the stuff I read then stands up -- Heinlein's "Stranger in a Strange Land" seems to wrap a wonderful premise around endless libertarian rants, and the characters in Asimov's Foundation books seem even flatter than than were when I was 13 -- but Dick's work, for all its flaws, has only grown in my estimation. (I won't quite class him with Beethoven, but enjoy the coincidence that the composer and this dedicated fan of Austro-German classical music were both born on Dec. 16.)

On what would be PKD's 81st birthday, I'm struck, as is everybody else, by how clearly he seemed to get where our culture was going -- in books written as early as the early '60s. I'm not talking about literal prediction (of, say, technological gadgets) but a broader understanding of human nature and society and religion that makes his vision far more prescient than that of the more optimistic, often militaristic Golden Age writers who preceded him.

For now, I'll leave my readers with a wonderful piece by Laura Miller with the title "It's Philip Dick's World, We Only Live in It." For better and worse, that is.
Posted by Scott Timberg at 11:05 AM

I have been a major Dick-head for years, even though I've never really been a major league sci-fi fan.
I posted the link to this on my blog back in August, 2007.

Speaking of "the great Thomas Pynchon," I recently concluded a four-part appreciation of "Inherent Vice" here. Links below the text of each installment will take you back to the earlier posts.

I've not yet read Vice, and have picked up a huge range of responses from the Pynchon faithful.