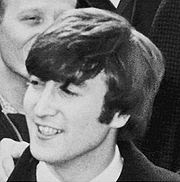 Twenty nine years ago, on a cold December morning, I woke up to see my mom, a bit addled, standing in my bedroom doorway. "I've got some bad news," she said. "John Lennon was shot."

I was in 6th grade, and I'd spent much of the previous few years sitting in the basement while my head spun along with the turntable to the Beatles music -- especially "Revolver" and an album my best friend had given me the year before, "Rubber Soul"; I especially liked the psychedelic "I'm Only Sleeping," the reflective "In My Life" and the darkly romantic "It's Only Love."  Of course I liked all the Beatles, but John was my first and fiercest cultural hero; I memorized the lyrics to his songs and read everything I could about him.

Not everyone was as zealous as me, and some friends preferred Paul or George, but it seemed inconceivable that someone might not like the Beatles.

I trudged to school, where the teacher was a supposedly "tough" customer who'd taken a special liking to me for some reason -- she was a kind of hero of mine as well. Partway through school, maybe at the lunch hour, she brought up Lennon's murder.

She was shocked, in fact -- because an opera singer had died the day before and no one had noticed. And here this "druggie" had been killed, and people were crying in the streets. Why all the fuss for a rock n roll singer?

Of course, this didn't exactly endear me to my beloved teacher. What was even weirder than the pitting of high vs. popular culture -- something I've always hated and still fight against, and especially wrong in the case of John -- was the fact that none of the other kids seemed as shaken up as I was. I knew my folks were upset, and an old friend from a different school called me later in the day and we talked forever about it. But had I landed in some baleful alternate universe where nobody liked the Beatles? The conversation moved on to another topic, but I didn't.

I'm the kind of person that likes to reconcile opposing points of view, to understand people's perspectives in the widest possible context. Maybe on the 30th of John's death I'll be able to see my teacher's reaction with more detachment. But today, I'm still so upset about John's death, and realize that day -- the end of his life -- was the beginning, for me, of the distrust of authority that I'm now old enough to read in his songs and life.

RIP John Lennon. Tonight I will blast "Rubber Soul" for my Beatles-loving three-year-old son all the way through.
Posted by Scott Timberg at 10:12 AM

Good words. I think I'll join you in the 'Rubber Soul' playback.